A brief history of the tether car

Tethered car racing originated in America in 1938 with the first events taking place in the U.K. in the early 1940s. At its U.K. peak during the next ten years four books and two monthly magazines were available, along with about twenty permanent tracks, and dozens of clubs spread all over the country. Trophies from the likes of Austin, IVIG, and Jaguar, were competed for, and specialist model supplies by the hundred were keeping the followers supplied with anything from engines to axles, wheels, bodies, special paint, suspension units, even complete kits or ready-built cars. However, at the end of this period, the mid 1950s, only a couple of tracks remained, the manufacturers and the publications had all gone. The hobby however continued in America and Europe up to the current day with speeds of over 200 mph. As these cars were raced before the advent of radio control, to enable performance to be measured, they were run on a circular track connected to a centre pivot by a steel cable, the current track in North Beds gives 10 laps tothe 1/4 mile which although smaller than the current international tracks, was a popular size for club tracks in the 40s/50s. The cars are started with either an electric starter or cord applied to the engine’s flywheel, if a clutch is fitted the car will pull away from a standing start. lf not, a throw launch is utilized, or starting can be done with a push stick placed on the back of the car and a good firm shove applied, until driven by the wheels the engine starts up (just as in full-sized cars] is used. Once the car is running and has built up speed the owner signals the time keeper to time for the 10 laps, after these are completed the car is either stopped by a knock off switch that extends from the car or allowed to run until it is out of fuel. The fuel tanks usually give a range of 20 to 30 laps so it does not take long before this happens. 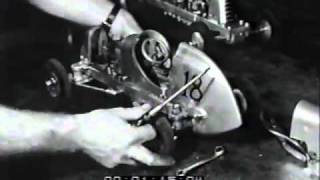 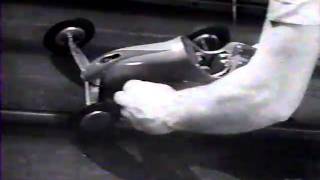 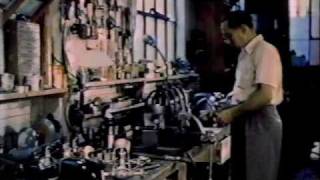 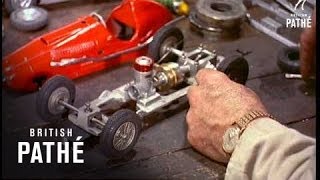 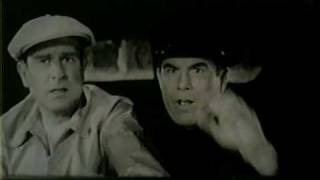